Co-produced with the Peace Education Center in conjunction with it’s Alternative Holiday sale. Internationally acclaimed vocal group Windborne is known for the power and innovation of their arrangements, as well as their unrivaled mastery of polyphonic music from around the world. Currently Windborne is touring a project called Song on the Times, songs of social struggle from movements over the past 400 years.

Scroll down to learn more about the Alternative Holiday Sale taking place the night of the concert.

“The best musical discovery of the year…Stunningly powerful vocal harmony in the tradition of the Watersons, The Voice Squad, and Coope, Boyes, and Simpson, Windborne sets a new bar for folk harmony singing today.”
-Brian O’Donovan, National Public Radio
“Some of the finest singers of protest and folk music that I have ever heard…One of the Best Albums of 2017! “
-SingOut! Radio Magazine
“Spectacularly good, utterly brilliant…a hugely impressive album!”
-Blues and Roots Radio
“Picking up the torch of protest folk song for the next generation…old songs for new struggles.”
Stunningly powerful vocal harmony floods the room as the four Windborne singers present Song on the Times, their project of working class movements for peoples’ rights from the past 400 years, sung for today struggles. The group was catapulted to new heights when clip of them singing in protest outside Trump tower went viral, and their Indiegogo for the project raised 1,600% of its goal from 2,600 people in every State and 22 countries. Aside from this new project, Windborne has collected and studied polyphonic vocal music for over 15 years from traditional singing masters from cultures around the world, Windborne is able to shift from radically different genres like no band you have ever heard, as comfortable with an improvised Corsican couplet song, as an English ballad. Lynn Mahoney Rowan, Will Thomas Rowan, Lauren Breunig, and Jeremy Carter-Gordon share a vibrant energy onstage – their connection to each other and to the music clearly evident. They educate as they entertain, telling stories about the music and explaining the characteristics and stylistic elements of the traditions in which they sing. 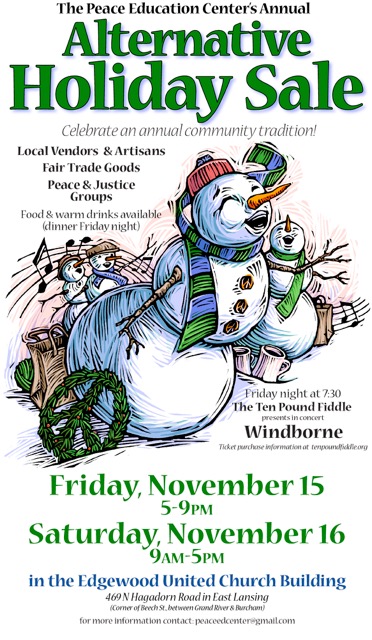