The Times They Are a Changin’ : Celebrating the Songs of Bob Dylan 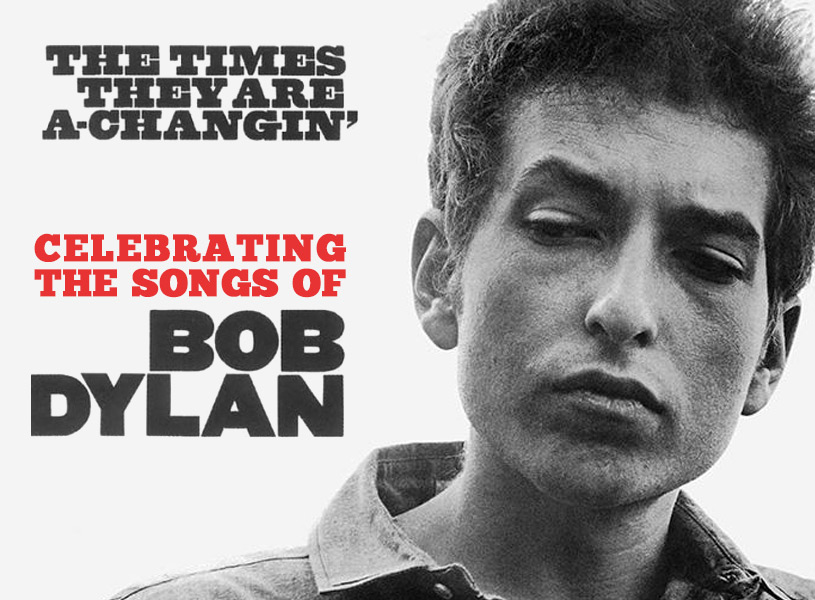 Join in an evening of songs celebrating the songwriter who has influenced popular music and culture for more than five decades. Performers include Jen Sygit, Roger Brown, The Dangling Participles - Tamiko Rothhorn, Austin Kaufmann, Larry Zwier, The Springtails - Andy Wilson and Julianna Wilson, and hosts Jim Hall and Cindy Morgan.

Join in an evening of songs celebrating the songwriter who has influenced popular music and culture for more than five decades. 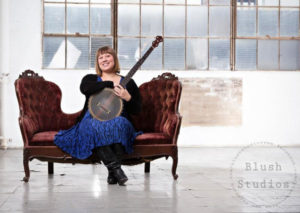 Jen has three solo albums under her belt with her latest release “So Long Pollyanna” named as album of the year by both John Bommarito (107.1 fm Ann Arbor, MI) and The Progressive Torch & Twang (88.9 fm East Lansing, MI). “So Long Pollyanna” was also nominated for two Jammie Awards (WYCE Grand Rapids, MI) including Best Song for “Sugar High” which also won Best Country Song at the Garden State Film Festival in 2014 for its use in the independent film “Buffalo”.  Her second release “Leaving Marshall St.” was nominated for a Detroit Music Award for BEST ACOUSTIC/FOLK ALBUM in 2007 and made it to number 9 on the independent roots music charts that year.  Jen is also a member of the all-female string band Stella!, roots rock band Lincoln County Process and back-up singer for recent Voice contestant Joshua Davis.  Now, besides regionally touring and playing shows, Jen can also be found hosting the popular weekly open mic at Dagwood’s Tavern in Lansing, MI, where she has been host of the thriving scene for fourteen years.  Jen is also the host of the weekly radio show “Eclecticana” (WLNZ 89.7fm Lansing, MI) and has been commanding the airwaves for five years now. 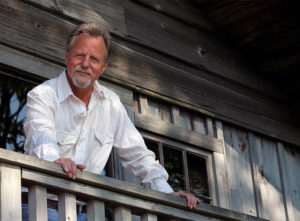 From the Blue Ridge mountains of North Carolina, where he was born and raised, to Europe and back again, Roger has been singing, playing and writing music.

He spent much of his music career in London, where he was a founding member of the band Stealers Wheel. He wrote the music and lyrics to Ringo Starr’s children’s release ‘Scouse The Mouse’ and worked with Ringo as Musical Director when the album was recorded. He has recorded and/or toured with Gerry Rafferty, Billy Connolly, Freddy Fender, Ringo Starr, Link Wray and Joann Kelly among others.He has toured extensively as a solo performer and band leader, and has appeared at numerous international music festivals.

Roger’s original songs, fifteen of which have been recorded by other artists, span the roots of American music from folk to traditional country to blues.

He has released two solo CDs. ‘Any Way You Please’ and his latest, ‘Sometimes You’re Lucky’. 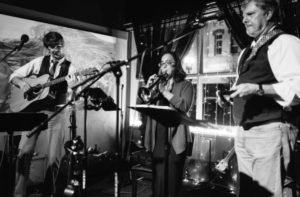 As all of the original members of this acoustic trio were Michigan State University English language instructors, one can almost forgive them their nerdy name. Almost.

Bringing together their love of harmonizing, songwriting, and performing genre-hopping covers, The Dangling Participles are an up and coming trio from the Lansing area.  Founding members, Austin Kaufmann, Larry Zwier, and Maggie Vosters started performing at open mics and local brewpubs in the Lansing area in 2015 and recorded a six-song EP, Devotion. When Vosters moved out of state in 2016, the band brought on Tamiko Rothhorn, who also coordinates Fiddle Scouts, the Ten Pound Fiddle’s interactive music program for young children.

Tamiko, Austin, and Larry all contribute songwriting and arranging talent to create a distinctive and diverse song set ranging from folk and Americana to Latin jazz, blues, and pop. Their instrumentation is also diverse, with Larry’s rhythm guitar anchoring Austin’s guitar, mandolin, and harmonica leads and Tamiko’s cornet and ukulele parts. The trio’s signature style, however, comes from their unique arrangements and strong vocal harmonies. 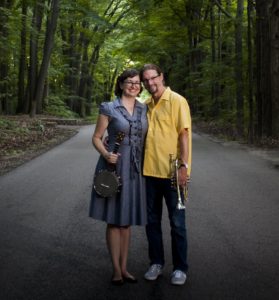 The Springtails are led by the charming Michigan-based husband-and-wife duo, Andy & Julianna Wilson, performing a variety of songs from vaudeville and swing-era standards to more recent pop, folk, and originals with voices, ukuleles, harmonicas, and cornet. Heavily inspired by recordings of Billie Holiday, Ella Fitzgerald, Bing Crosby, Frank Sinatra and many others, Julianna’s lilting voice pairs naturally with Andy’s soulful harmonica and retro sounding horn. The intimacy of their sound will take the listener back in time and space with songs that range from haunting ballads to playful swing. Jim Hall and Cindy Morgan have performed as solo artists, in bands, and as a duo. Their versatility (either one can sing lead or harmony) allows them to explore many genres, from traditional, old-time & folk music, to blues, bluegrass and contemporary singer-songwriters. They create an intimate & personal sound, emphasizing tight vocal harmonies, strong lyrics & solid instrumental touches. Between them, they play a multitude of acoustic instruments, with Jim on guitar, mandolin, banjo, fiddle & harmonica, and Cindy on guitar, u-bass, and occasionally keyboard, accordion & hand percussion.

Jim & Cindy are active in the local music scene, beyond performing. Hall & Morgan lead the band and Sally Potter leads the singing at the monthly Community Sings in the Lansing area. Jim has a radio program, “Roots & Branches,” on WLNZ 89.7, lccradio.org. Cindy is on the Ten Pound Fiddle Board, and is the Volunteer Coordinator for the Folk Alliance Region Midwest (FARM).