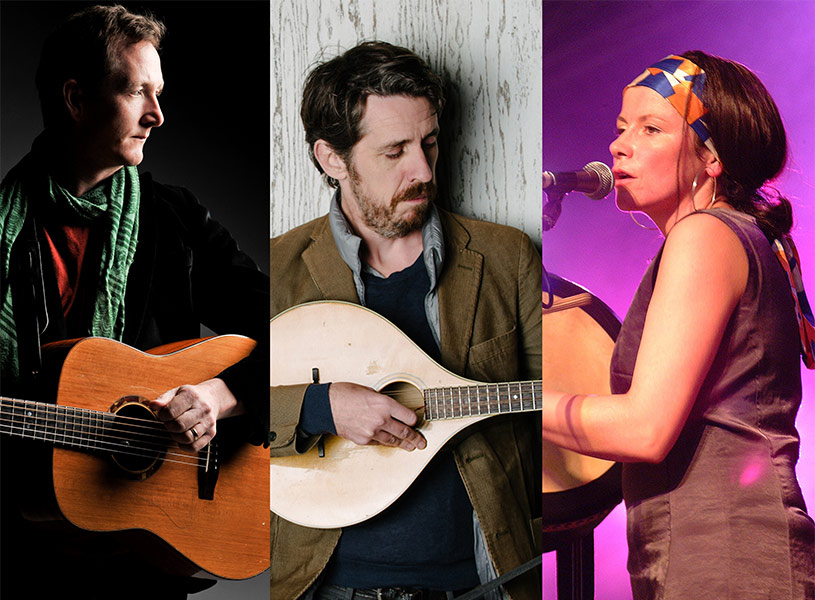 Each player in The Alt is a leading light of today's folk scene and though this could be easily called a supergroup. At its heart, The Alt is really a celebration of friendship and song.

Each player in The Alt is a leading light of today’s folk scene and though this could be easily called a supergroup, at its heart The Alt is really a celebration of friendship and song.

The Alt – Irish: Three masters of Irish music—Asheville guitarist John Doyle; vocalist, Bodhran and Bones player and Dervish’s very own front-woman Cathy Jordan, and singer and guitar and bouzouki player Eamon O’Leary—have come together to celebrate the songs and spirit at the
core of the tradition. The ballads, tunes, and new and rediscovered songs each artist brings to The Alt reflect their love of the traditional music that has been a touchstone of Irish identity for generations. They also build on the heritage of Irish immigrants who settled in Appalachia, where Irish song provided some of the building blocks for old-time, country, and bluegrass. In choosing to record their first album, the eponymously titled The Alt, at a cabin in North Carolina’s Appalachian Mountains, The Alt embraced this fruitful musical lineage.

Name many of the most notable recordings and/or performers in Irish music and it’s a fair bet that John Doyle had something to do with them. Liz Carroll; Eileen Ivers; Karan Casey; Solas; Michael Black; Mary Black; the trio of McCusker, McGoldrick and Doyle; The Teetotalers (Martin Hayes, Kevin Crawford, John Doyle); and now Usher’s Island (Andy Irvine, Donal Lunny, Mike McGoldrick, Paddy Glackin and John Doyle)
– a veritable who’s who of the greatest names in Irish music.

“Doyle on guitar has risen to a level occupied by him alone. No one in Irish traditional music is a better guitarist than him right now.”  —Earle Hitchener, The Wall Street Journal

In 1991 Cathy joined Sligo based traditional group Dervish and started her recording career with the Dervish album “Harmony Hill” to huge critical acclaim. This saw Cathy returning to her roots of traditional music and song and sparked off a musical journey which has spanned nearly 3 decades. During that time Cathy has been the front woman and bodhran player with the group and has led them through thousands of concerts in hundreds of cities in nearly 40 countries.

Some of the more memorable of these were playing at the Great Wall of China, the Wailing Wall in Jerusalem and at the biggest rock music
festival in the world – Rock in Rio to over 250 thousand people.

Eamon O’Leary is one of the most in-demand Irish vocalists and guitarists in the US today. Eamon started playing Irish music while growing up in Dublin through his friendship with the Mayock family, traditional musicians from County Mayo. When he moved to New York City in the early 90’s, he immersed himself in the city’s traditional music scene and travelled widely, performing with many of the great players in Irish music.