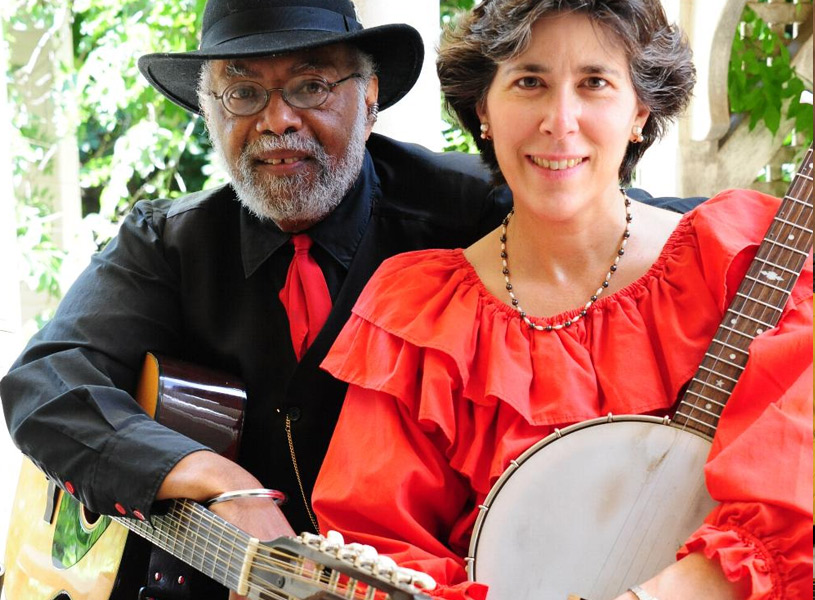 Sparky and Rhonda Rucker perform throughout the U.S. as well as overseas, singing songs and telling stories from the American folk tradition.

“Sparky has a rare musical talent combined with a scholarly interest in his material.” -SAM HINTON

“Echoes of Woody Guthrie, Robert Johnson, Leadbelly, Mississippi John Hurt, and many others can be heard in Rucker’s music. Yet he copies none of them. His style is his own.” -ROBERT TRUSSELL, The Kansas City Star

JAMES “SPARKY” RUCKER has been singing songs and telling stories from the American tradition for over fifty years. Sparky performs with his wife, Rhonda Rucker, adding vocals, guitar, banjo, and spoons to their music. They appeared on the Grammy-nominated CD, Singing Through the Hard Times, in 2009. Sparky has released fifteen albums, and their 1991 release, Treasures and Tears, was nominated for the W.C. Handy Award for Best Traditional Recording.

“This CD features Rhonda’s fine vocals, wonderful piano accompaniments and some excellent songwriting, showcasing an environmental sensibility, never more in evidence than in the title track, “One Earth,” a song eloquent in its direct simplicity.”
-GREG ARTZNER, reviewing One Earth

RHONDA HICKS RUCKER practiced medicine before becoming a full-time musician, author, and storyteller. Rhonda performs with her husband, James “Sparky” Rucker, adding vocals, piano, banjo, blues harmonica, and rhythmic bones to their music. They appeared on the Grammy-nominated CD, Singing Through the Hard Times, in 2009. Rhonda has recorded nine albums with her husband, and their 1991 release, Treasures and Tears, was nominated for the W.C. Handy Award for Best Traditional Recording.