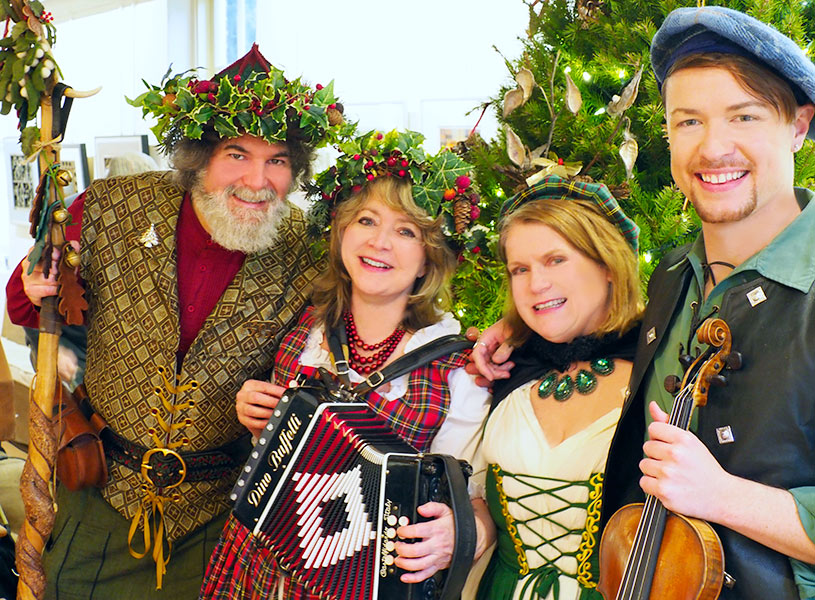 A Celtic Christmas Celebration for all! Bring your voices, as you’ll be invited to sing along!

The OCEAN Celtic Quartet will transport you to the Yuletide celebrations of yore in a program featuring traditional carols, foot-stomping Celtic fiddle tunes, 19th century broadside songs, original seasonal compositions, and even an appearance by Father Christmas of the old mummers plays! With their soaring vocals and high-energy Celtic instrumentals, OCEAN is known for marrying lighthearted exuberance with great spiritual depth in a program that appeals to all faiths and wisdom traditions. Come in good voice, as you’ll be invited to sing along!

So come on out and celebrate the magic of Christmas and the Winter Solstice in cozy fellowship. This boisterous concert will include British Mummer’s play recitations, traditional English and French carols, Scottish & Irish fiddle tunes, 19th century broadside songs, and original seasonal compositions celebrating both the joy of the season of light and the introspection of the dark half of the year. The OCEAN Celtic Quartet is led by composer and ethnomusicologist JENNIFER CUTTING (accordion and keyboards), a Washington Area Music Association Musician of the Year and Songwriter of the Year. OCEAN features the stunning vocalist CHRISTINE NOYES (formerly of the maritime music group Crab Alley), folklorist/vocalist/percussionist STEPHEN WINICK, plus U.S. National Scottish Fiddle champion SEÁN HEELY. Cutting’s original anthem, “Song of Solstice,” has become a classic on Celtic and Folk radio, and the title cut of OCEAN’s newest CD, “The Turning Year,” reached #1 Song on the Folk Radio charts for December 2021. Come prepared to sing along with OCEAN on these and other seasonal songs ancient and modern!

The title cut of OCEAN’s new CD The Turning Year was #1 Song on the Folk Radio charts!
Read more about the new CD here.