Join your friends and your community for local favorite Kitty Donahoe (7:30pm) followed by a Pub Sing (9pm), led by Sally Potter. There will be a cash bar, featuring two local craft brews, and complimentary coffee, tea, cider, cookies, and pretzels. Pub Sing song sheets will be provided.

Supporting her recently released CD, “The Irishman’s Daughter,” and fresh from leading trips through Ireland with Inishfree Tours, Michigan favorite Kitty Donohoe will return to the Ten Pound Fiddle!

There will be a cash bar, featuring two local craft brews, and complimentary coffee, tea, cider, cookies, and pretzels. Pub Sing song sheets will be provided.

Entrance, and plenty of free parking is on the northside of the building.

Come celebrate the Irish with music, singing, food and drinks, and community.

Ann Arbor based songwriter and Michigan Emmy recipient Kitty Donohoe is not an Irish or Celtic singer, but she clearly draws from that part of her heritage, as well as her American roots, as an artist. 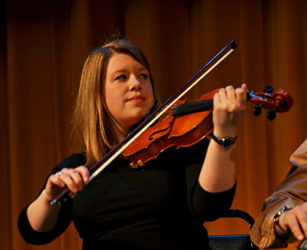 Kitty will be joined by fiddler Nellie Schrantz.

Iconic WFMT-Chicago folk dj Rich Warren calls Kitty “far above and beyond most singer songwriters.” She writes music that has been called “earthy, luminous and compelling” (The Weekender) and she’s been praised in the press equally for her voice, her musicality, and her songwriting. Sing Out!, one of the oldest and most respected folk music magazines in the industry, says that Kitty is “ one of the rare singer-songwriters to sensuously weave words and melody into a strong and mezmerizing fabric.”

Always aware of her Irish roots, Kitty left home for Nova Scotia at 19 and discovered traditional Celtic sounds for the first time. The fiddles, accordion and whistles inherent in Maritime & Canadian music felt very familiar to her, and a few years later she moved to the Corktown (Irish settlement) area of Detroit, living just one block from the Gaelic League, which featured touring Irish bands 7 nights a week. Kitty and her friends rarely missed a night! At that point Kitty began to explore traditional music from the British Isles, moving backwards from folk-rock bands like Steeleye Span to earlier, old-style solo artists. By the time she recorded her first album in 1986 she was dipping into the well of her musical heritage by integrating traditional instruments with some of her original songs.