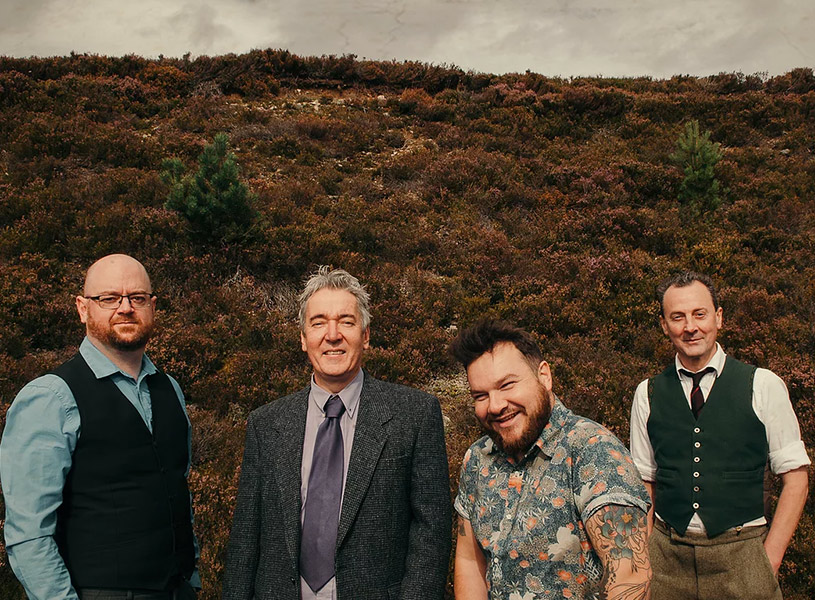 "The Old Blind Dogs play with a compelling energy and intoxicating rhythm," says The Scotsman, “...as players and audience seem to share a wild ecstasy of emotion."

Since forming in Scotland in 1992, ‘The Dogs’ have stood on the cutting edge of the Scots roots revival. The band has developed its own trademark style with an energetic mix of songs and tunes. Dynamic percussion, polished vocals, soaring fiddle and stirring pipes fuel the delicately-phrased melodies and traditional songs.

The Dogs, one of Scotland’s most highly touted traditional folk bands, are not known for shying away from change. A strong, shared musical vision has allowed the group to ride out inevitable line-up changes and the current foursome of Jonny Hardie (fiddle, vocals), Aaron Jones (bouzouki, guitar, vocals), Ali Hutton (pipes, whistles, vocals) and Donald Hay (drums, percussion) have proven more than capable of carrying on the tradition of the band that the Montreal Gazette called “…a Scots neo-traditional supergroup with a bracingly modern musical attack.”

The Dogs have released thirteen studio albums and have won numerous awards including the prestigious title of Folk Band of the Year at the 2004 and 2007 MG ALBA Scots Trad Music Awards. Their 2007 release ‘Four On The Floor’ picked up the IAP ‘Best Celtic CD’ Award and ‘Wherever Yet May Be’, released in 2010 was nominated for the same award.Their last CD, ‘Room With A View’ was shortlisted for Album of the Year at the MG ALBA Scots Trad Music Awards in 2017.

“Old Blind Dogs have mastered the tricky art of innovating within a musical tradition while faithfully revealing its essence.” (Acoustic Guitar)